skip to main | skip to sidebar

Ege Maltepe -To thine self be true 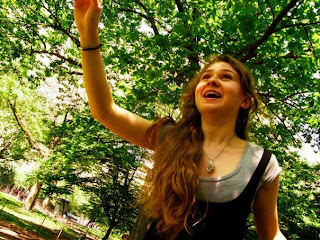 When I told Karalyn that I would visit Ege’s performance I didn’t know what to expect. I took the subway to New Actors Workshop on 259 West 30th Street. I was greeted at the door by an energetic member who demanded a word on spot. I wasn’t expecting to contribute right by the door so I muttered the word: “Chain” referring to the click clacks of the old New York elevator. We were headed to a small room where the performers were apparently creating a ritual of rebirth most likely the birth of spring. There I spotted our alumni. She wasn’t hard to catch with her Istanbul written tshirt. By the time the program started the room was completely full with audience filling up every possible start. The actors performed various improvised acts provided with the audience contribution. My word “Chain” popped up in one of the games as our alumni friend was flying an imaginary kite she had to guess the word by comparing her partner’s descriptions. I have to clarify this: there are no props on stage. This is all free form imagination, the actors build up descriptions and reactions on the spot. The audience was right in the game, everyone was shouting out settings, names, landmarks, characters so that the actors could pick on. The ending was memorable with our alumni singing and playing croquet. It was very energetic and engaging.

I decided to interview her and find out more about her story. She welcomed the proposition so we had stimulating discussion on US, acting and Bilkent.

Ege Maltepe is a 2006 MSSF graduate. She arrived in New York with a Fullbright Scholarship having master’s degree in acting at New Actors Workshop which is founded by three master teachers Paul Sills, George Morrison and Mike Nichols. Her current school New Actors Workshop (http://www.newactorsworkshop.com/index.htm) is a unique school embracing the Viola Spolin approach with Lee Strasberg's method. Spolin believes that every person can act and improvise if the environment is permissive. “We learn through experience and experiencing and no one teaches anyone anything.” 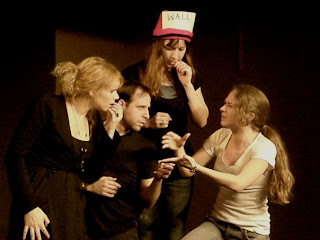 Ege started acting when she was 13 at Istanbul Mujdat Gezen Art Center's summer classes . She later joined Ferhun Sensoy’s Nobetci Tiyatro School.(Its hard to translate Ferhun Sensoy’s satirical pick for a name but I will give it a try: Precinct Theater) This project was started in 1980s and has allowed very young talents as well as very seasoned actors to take part in. Rasim Oztekin, Tuncel Kurtiz, Demet Akbag are some of the well known members that were brought to life by the “Nobetci Tiyatro” Ege expressed her gratitude to work with such seasoned actors at early age but points out that she had to drop out because of University Level Exams. She passed her exam and were placed in Bogazici History Department yet her heart lay on acting: “ I really wanted to join MSSF but I could only qualify for partial scholarship after my first audition to Bilkent.” So she had to go to Bogazici University. “ During orientation I had 5 liras left in my pocket and I gave that away to Bogazici University Theater Club. When I arrived at the table where they asked 12 liras for my basic stationary expenses I had to tell them that I already spend that money on….*smiling* on theater.” Ege points that Bogazici Theater Club was a very competent and structured club. They continued their performances after graduation. She thought that continuing with them wouldn’t be a waste. Yet MSSF was still on her mind. “ I came to the decision that there was nothing I wanted more than to be an actor” After a year she applied and received full scholarship. “Why so persistent on MSSF?” She responded confidently: “My first impression about the faculty in the auditions was very positive. They were supportive and even helpful. Auditions could get very cruel but they made me feel comfortable. I’ve also decided to be away from Istanbul and its chaos and concentrate on acting. I was also very lucky because my classmates were very supportive. The group you are in is very important in theatre. I had a supportive one, just like the group I am in right now in New York” I wanted to know what Ege felt about being in US now that she mentioned about collectivism. Ege desired a vibrant place and that was New York. According to her description New York was the center of commerce, fashion, art and its coastal. ( I can see how that matters for an Istanbul resident having to live in Ankara.) She observed that there were a lot of Europeans who adapted the New World perception: positive attitude. Americans were overall optimistic, encouraging attitude. She said, it is mocked quiet often, the American way of collecting the group and receiving a pep talk wasn’t that bad at all. She added it was an interesting kind of idealism, almost an Eastern type of approach. “ Or maybe it is just my perception…” She also encourages everyone from every type of job to go abroad for a while, because this is the only way to really see and understand where you live; leaving and then going back.

I thanked her for the interview and as her order of Japanese food arrived we faded away into off-the- record discussion on community projects, New Orleans and piano playing for starters. If anyone is interesting in learning how to learn to play piano Ege is willing to get you in contact with a very inspirational, talented artist Emir Gamsizoglu. Remember everyone can do anything it’s never too late !
Posted by Einzelganger at 7:48 AM